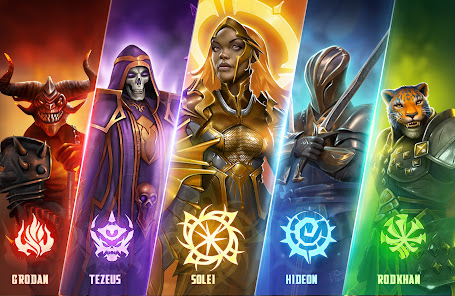 Explore all game modes in Blitz: Rise of Heroes! Each provides a different experience, different opportunities, and different rewards.

The ARENA is a place where you can test your strength by fighting other players in PvP battles for rating points, extra experience and gold. Climb to the top of the rankings and prove your superiority!

The TREASURE MAZE is a unique mode consisting of several levels with split paths, which is different from linear missions. Choose a path for your heroes strategically to meet merchants, recruit an assistant to your squad, restore your heroes’ health and energy, or even resurrect a dead hero. Win rewards for the battles along the way.

FLAMING FORTRESS is a mode that gradually increases in complexity. Dangerous opponents are waiting for you on every floor of this citadel. The higher the floor, the stronger the enemy units are. Victory on one floor allows you to climb to the next and get increasingly valuable rewards.

In the epic STORY CAMPAIGN, as many as 70 territories are available on the map of Larnes, each of which has dozens of levels waiting for you to develop the plot of the game. Take part in battles against opponents from different factions to find out what the future holds for your heroes.

TOURNAMENTS are time-limited events that provide you with a new challenge and promise great rewards.

COMING SOON: with each next update, even more game modes become available to you! The Temple of Trials and the Journey Sphere are already in development. Very soon you will find out what new challenges the world of Larnes has prepared for you. Diversify your gaming experience and make the most of Blitz: Rise of Heroes!

Blitz: Rise of Heroes boasts a flexible upgrade system, thanks to which you can assemble a unique build for each battle! Upgrade hero level, skills level, hero rank, equipment and profile. Become an unstoppable force to go to PvP stronger than ever!

Enter the existing Guild of players or create your own to become its leader. By joining it, you’ll get the opportunity to take part in boss raids, such as Guild Patrol and Guild Hunt. Share news with friends, debate which squad is superior, and work together to claim victories in Chat. Invite your friends to Blitz: Rise of Heroes with you and get a reward that will make your gaming experience even more exciting.

Log in to the game daily to collect resources, receive daily rewards, Larnes gifts, promotional bonuses, referral perks, benefits for completing tasks and achievements. For every 15 awards received in a row, you’ll get a Super Bonus!

Combat your way through a visually-stunning 3D fantasy RPG Blitz: Rise of Heroes with stunning character design, lush environments, and exciting gameplay. Create your squad and watch mythical fully-rendered fighters paving their way to victory having thousands of unique skill and attack animations. Enjoy the convenience of the idle auto-play system and become the true legend of the realm!