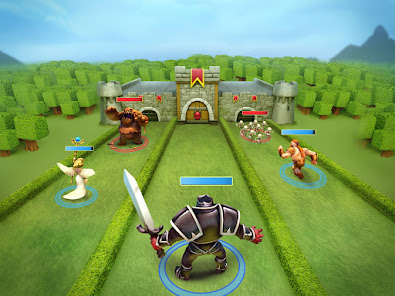 Duel players from all around the world in this fun real-time strategy game! Collect and upgrade 40+ troops and spells: from the lovely Dryad to the tremendous Dragon! Play now, for free!

Choose your strategy and lead your army to victory in the epic battle! Build a strong deck and crush your enemy’s castle deploying your troops! Earn trophies and climb the global ranking! Clash with the enemy clans and defend your army! Open your chests to discover and unlock new powerful warriors, monsters, and spells! Will you get one of the magic legendary cards? Define your strategy and choose your warriors carefully. Archers to kill from a distance? A Royale Golem to break through the defense? Or a heal spell to give a boost to your troops?

Your decision will make the difference between victory and defeat!

Get into the arena and clash against other players on epic duels! The combat may be hard, prepare your strategy to win this PvP battle game!

A great multiplayer strategy game! Join now this epic battle game and have fun in the clash against your enemies! Duel online with your friends and be one of the lords of mobile battles!