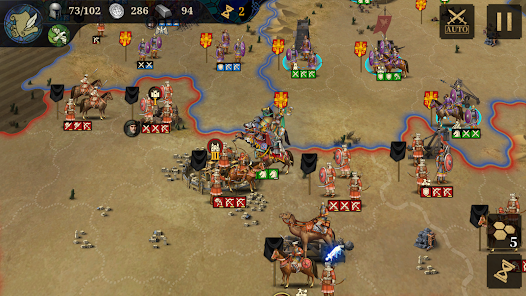 Enjoy countless maneuvers and strategies in this war-game, experience the history of the Medieval Age and compose your own epic.

【Game Introduction】
The barbarians invade, the Roman Empire falls, the European continent suffers from continuous wars and enters the long period known as the Medieval Age.
Various forces emerge as the times require, the Vikings, the Britons, the Franks, the Holy Roman Empire… A new series of wars are coming.
Witness the heroic deeds and historical incidents among European countries across various battlefields!

【Game Features】
Appreciate the changes of the times through hundreds of battles.
14 chapters, over 120 famous campaigns, 150 countries and forces. Fascinating stories based on historical incidents, including Rise of Byzantium, Viking Invasion, Burning Crusade and Hundred Years’ War bring you back to the war-ridden Medieval Age.

Experience the fights and struggles between countries in the Medieval Age.
In Barbarian Invasion, Rise of Byzantium, and Legend of the Vikings, multiple parties vie for the throne. European War, for the first time in its serious, adopts the diplomatic system in the conquest model featuring undetermined camps. Players can convince other parties to join the force via diplomacy method. Build cities to increase material output, research policies to change the direction of the country, change the consuls to get more tax revenue. The occurrence of historical events will affect the battlefield situation, and complete the mission to obtain battlefield rewards.

Hundreds of generals and distinctive armed forces are at your disposal.
There are over 150 generals, including Frederick I, Saladin and Beowulf. Become legendary commanders like Genghis Khan, Joan of Arc, Richard I, William Wallace and fight in the wars. More than 10 countries boast over 300 basic military forces, including more than 30 legendary units like Knights Templar, Knights Hospitaller and Teutonic Knights.

【Priceless Treasures】
Treasures of Pharaoh, John Lackland, Solomon and Knights Templar are waiting for you to explore.

Take control of one of the mighty nations during the times of World War 2. Conquer provinces, forge alliances and build up your economy. Research top secret weapons of World War 2 and become the one true superpower! Intelligent alliances
or ruthless expansion, wonder weapons or mass assault? It is up to you which way you choose!

For fans of realistic grand-strategy titles Call of War offers a huge gameplay environment, many different functions and units to choose from. Jump into matches, battle it out over weeks and become the rank leader in this addictive WW2 game.

Jump into WW2 and test yourself against real players in real time on historical maps!

Call of War is free to download and play. Some game items can also be purchased for real money. If you do not want to use this feature, please set up password protection for purchases in the settings of your Google Play Store app. 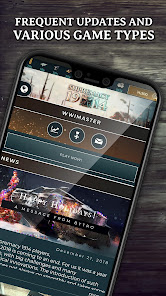 Supremacy 1914 – WW1 Strategy Mod Apk Description: Choose your favorite nation during WWI and assume the highest office in your desired empire. Balance the production of materials, troops and weaponry with the rare resources your land has to offer. Form alliances with your competitors, do important trade deals or fight yourself through the 1st World War scenario you are challenged with. This rough period demands a valiant leader like you. Ensure your peoples survival, train them to join their brothers in arms on the battlefields on foot, as cavalry or even place them into the first experimental tank. Develop your country and slowly conquer the world.

“Immersive Strategy – This is not a game that you play once and forget; the world map is huge, and the options available are vast. Your game may go on for months at a time!” 9.3/10 – MMO Games

“Supremacy 1914 seems pretty interesting and will definitely be one of your favorites if you like this genre. There is also role playing going on which will make you feel at home.” 8.6/10 – OMGSpider

Veteran grand strategy players will see their strategic skills be put to use on the battlefields in this huge World War I game, battling with economy, armies and the ever growing threat presented by your opponents. Play as Wilhelm II or change history however you want. In Supremacy your imagination and skill are your only limits! Up to 500 players can compete in real time on historical and fictional scenarios.

If you are an existing Call of War or Conflict of Nations player, feel free to use your existing account to play the game!

S1914 is free to download and play. Some game items can also be purchased for real money. If you do not want to use this feature, please set up password protection for purchases in the settings of your Google Play Store app. 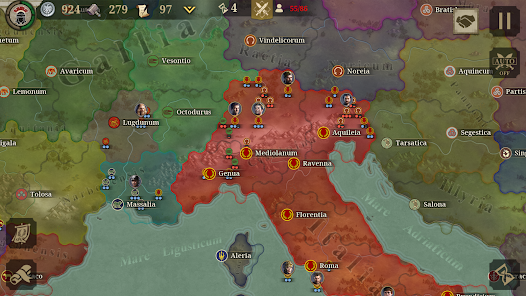 Great Conqueror: Rome War Game Mod Apk Description: Commander! The Roman Republic is on the march and many powerful nations oppose the expansion of our empire. War is imminent.

Rome needs the might of all talented warriors! Great generals like Caesar, Pompey, Antony, Octavian and Spartacus will fight with you. Let us witness the birth of a great conqueror!

Become the glorious commander of the legions in hundreds of historical battles and locations of Roman history. Witness Rome develop into a great empire spanning Africa, Europe and Asia.

** Change sides and help Rome’s surrounding nations and tribes stand up to the mighty Roman army. Stand against the expansion of this world empire and rewrite the history of the defeated!

From the Mediterranean to the British Isles, Rome, Egypt, Carthage, the Gallic tribes, the Germanic peoples and many others struggle for supremacy. Will Rome conquer the world or will the victor himself become the vanquished and an entirely new empire be established?

** Experience hundreds of years of history, from the Punic Wars during the Roman Republic, through the time of the Triumvirates to the era of the Roman Empire.

** Be friend or foe, declare wars or make alliances and support allies against powerful opponents. Choose the foreign policy that is in the best interest of your country. All roads lead to Rome!

** The tide of war is unstoppable. Expand cities, recruit legions, use strategies, research technologies and lead your empire to ultimate victory.

** Command the armies of countless countries and conquer the ancient world. Change their future and lead them to unimagined greatness.

Lead your legions on an expedition and use strategies and tactics skillfully. Play your commander skills to the full with a limited number of units and defeat powerful foreign enemies!

** New challenge mode that gives you a new kind of gaming experience.

** Each step of the expedition involves many difficulties and dangers. Keep adjusting your battle plans and achieve ultimate victory.

** Collect the best war trophies and get special conqueror uniforms as proof of your glory.

Rome was not built in a day. Build the Arc de Triomphe, the Colosseum, the Pantheon and restore the glory of the past!

** Complete the tasks set by the Senate and win rich rewards.

** Train infantry, cavalry, archers and navy to improve their skills in battle.

** Equip your generals with battle flags and treasures to improve their talents and increase their skills.

*** By using the cloud archive, your progress can be stored online and synchronised when you switch devices. The security of your archives is guaranteed.

The war is about to begin, and the most powerful army of the Second World War is waiting for an outstanding War commander! Lead your army to join the important historical battles from 1941 to 1945, experience this classic war strategy games, and delve into the tactical sandbox simulator of world war 2!

Realistic simulation of world war 2, sandbox, strategy, tactics and war games! A comprehensive competition of the army, air force and navy.
Through the strategy games based on ww2, use your own strategies and tactics to create your own history!

In the turn-based WW2 strategy games, the situation of the entire battlefield will change dramatically. Reasonable use of the army navy and air force to occupy the important strongholds of your opponents is a question you need to think about all the time.

You need to continue to accumulate merits on the battlefield, from a soldier to a marshal.
Pay attention to the upgrade of military facilities in the headquarters and the research of technology, they will provide you with the necessary assistance in the war.
It is also very important to hire other generals to join your camp, and to give play to each general’s expertise.
If you let General Zhukov command the armored forces or let General Speller command the air forces, they will be able to play their role to the fullest. Use our sandbox army strategy games to lead it and win the second world war!

Experience the real and rich terrain on the ww2 battlefield!
The correct war strategy is the key to winning the final victory! 3D terrain brings richer strategies. Plan your army and conquer or destroy connecting bridges, bunkers and roadblocks to gain tactical advantage! Every strategy you adopt will determine the outcome of ww2.

The legendary Soviet and German world war 2:
The Battle of Minsk, the Siege of Kiev, the Defense War of Leningrad, the Defense War of Moscow, the Mars Project and the Curonian War. And we will continue to update. Can you change the historical outcome of these wars?

Are you interested in the history of the Second World War? Share the turn-based ww2 games with your WW2 military fans and play this strategy games together! Enjoy this tactical sandbox games and help you exercise your strategic layout skills!

Special thanks to the people who helped us a lot in this version.
Welcome to subscribe! We will continue to provide you with important information about WW2 gamess!
Facebook: https://www.facebook.com/World-War-2Strategy-Battle-103841412190212
Instagram: www.instagram.com/joynowsggames/