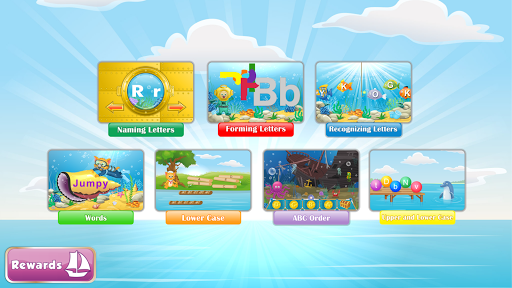 The game teaches the alphabet to the children one set of letters at a time. We split the alphabet into seven sets: ABC, DEF, GHIJ, KLMN, OPQR, STUV, WXYZ. As the children complete the activities for a particular letter set, they build a specific boat. This gives them motivation to play and learn.

This app does not teach the phonetic sounds that the alphabet letters make. Knowing how the letters are pronounced is a separate educational goal, which is covered in Intellijoy’s separate app, Kids ABC Phonics. Including phonics in this app would detract from the focus and delight of this game.

✔ Naming Letters: A delightful way for kids to learn the names and appearances of each ABC alphabet letter at their own pace.
✔ Forming Letters: Kids assemble alphabet letters with colorful puzzle pieces to recall the familiar letters they’ve learned.
✔ Recognizing Letters: Fishing for alphabet fish as they swim by reinforces letter familiarity and its pronunciation.
✔ Identifying Letters in Context: This simple game teaches kids to recognize the alphabet letters as they appear in words. As a result, they learn that words are made up of letters.
✔ Matching Upper Case to Lower Case Letters: This activity reinforces that each letter has two variations; one upper and one lower case letter. The child will enjoy matching the letters to each other to build a raft.
✔ Distinguish between Upper Case and Lower Case Letters: Listen and search for the upper case or lower case letter and toss it to the dolphin for some fun!
✔ Ordering the ABC’s: The child explores the deep sea to find letter-coins, and uses these to create a segment of four letters in a row within the alphabet.