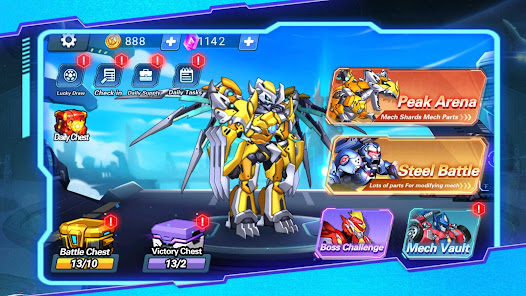 🔺The game includes steel battle, peak arena and boss challenge mode. It can be played anytime and anywhere. you can’t stop when you get started!

💰Players can log in to receive massive amounts of coins and gift items, and no longer have to worry about not having cool mechas or enough coins to upgrade equipment. You can also get powerful and cool mechas with zero threshold, dominate the entire mecha arena!

👾The unique BOSS challenge gameplay is tense and exciting. Players can collect multiple mechas to challenge powerful BOSS and get rich rewards.