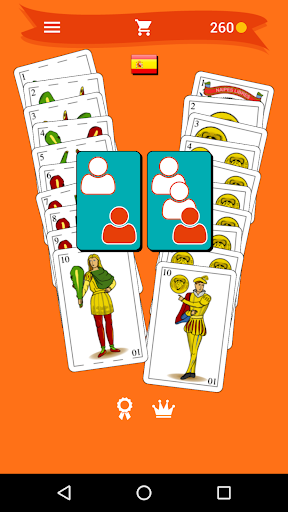 Sevens is a Spanish card deck game (40 cards), in which 2 players participate.
The objective of the game is to run out of cartes before the opponent.

Each player receives 10 cards, the rest of the cards will remain in the deck face down to draw.

Start the player who has the 5 gold.

The cards are grouped by suits: golds, cups, swords and clubs.

On his turn the player must:
– Throw a card of the same suit following the ladder higher or lower than the cards on the table.
– Throw a 5 from another club.
– Pass the turn in case you can not shoot. If there is a deck, you must also draw a card.

Win the first player who runs out of cards. The player who wins gets 5 points plus one point for each card that his opponent has not thrown.
Bugs Fixed